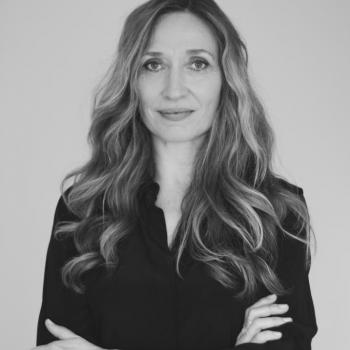 Hanna Dóra Sturludóttir is one of Iceland's leading mezzo-sopranos and her career, both in opera and concert have taken her around the world.

Hanna Dóra studied at the Reykjavik Academy of Singing and the University of the Arts (UdK) in Berlin with teachers like Prof. Dietrich Fisher-Dieskau and Prof. Aribert Reimann.

During her engagement at the Theater Neustreliz, she sang opera roles like Marie (Wozzeck), Cio Cio san (Madame Butterfly), Countess (Figaro) and had guest performances in Komische Oper in Berlin and all over Germany.

At the Icelandic Opera Hanna Dora sang Carmen, Ariadne auf Naxos, Miss Jessel (Turn of the Screw), Donna Elvira (Don Giovanni) and Princess Eboli (Don Carlo) and for her interpretation of Eboli she was nominated “Singer of the Year” at the Icelandic Music Awards 2014.

Hanna Dóra has performed in concerts, both Lieder- and Oratorio, all over Europe and contemporary music has always been a big part of her repertoire. Her latest nomination was Gríman-Theater-price 2021 for KOK, a new Icelandic opera.

Hanna Dóra Sturludóttir is now leading and teaching at the voice department at Iceland Academy of the Arts.