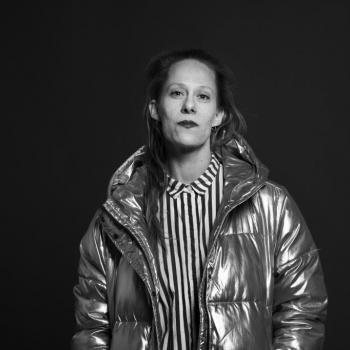 Steinunn Ketilsdóttir works multidisciplinary as a performer, choreographer, researcher, teacher and organizer. In her practice she moves through, dance, text, and thought and is devoted to creating exploratory spaces.

Steinunn holds a BSc. in Business Administration from Reykjavík University since 2002 and in 2005 she earned a BA in Dance from Hunter College in New York. In 2016 she graduated with a Masters degree in Performance Studies from NYU Tisch School of Arts where she was honored with the Performance Studies Award upon graudation.

Steinunn has worked internationally throughout her career creating a number of works that have been shown across Europe and in N- and S-America. From 2007 she collaborated closely with dancer and choreographer Brian Gerke forming the duo Steinunn and Brian. Currently she collaborates with choreographer Sveinbjörg Þórhallsdóttir and visual artist Jóní Jónsdóttir. She has been nominated and awarded for her works and in 2010 she received the Icelandic Theater awards for both performance and choreography for her solo Superhero.

Steinunn has been an active member of the independent dance scene in Iceland and was involved in the development of Reykjavík Dance Festival and the founding of Reykjavík Dance Atelier. She continues to be dedicated to creating platforms and contexts to connect the local dance community.

Steinunn has been involved with the Performing Arts Department since 2007 as a guest teacher, adjunct, research fellow and now as a program director along with Saga Sigurðardóttir.